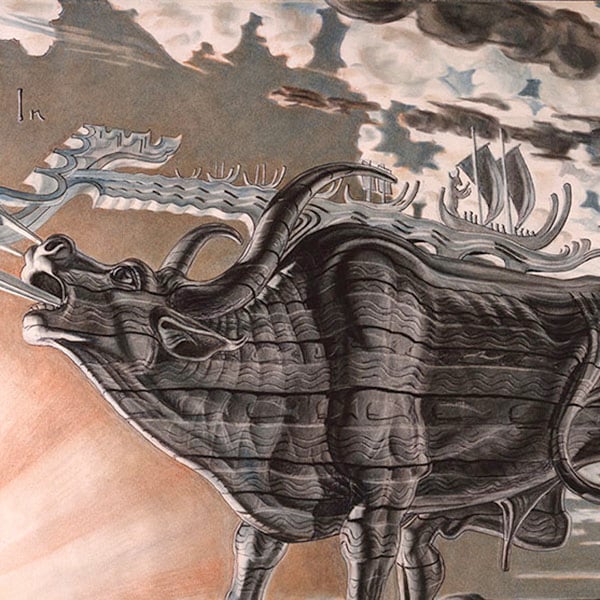 Limited edition of prints based on the original conte crayon drawing c.1958

The Lowing Ox for Wolin

"The German chroniclers Dietmar, Von Bremen and Von Besau report that the seaport city of Wolin, once located on the Baltic shore, was 'The greatest Metropolis of Europe.' Much earlier, Ptolemy, the Roman historian, geographer and traveller, reported that where now Poland stretches from the Black Sea to the Baltic, there was a Mare Longum ('Long Sea') over which the Greek ships sailed for the city of Calisia (now Kalisz). But excavations in Biskupin reveal an even earlier existence of the Polish state. Legends and folk songs report the sinking under the Baltic Sea of the metropolis Wolin, whose name means 'of the Ox,' according to ancient rebus used to convey thoughts before writing. To hint at Wolin having been built by the Flood Refugees and being submerged again I gave the Ox horizontal stripes, a symbol for 'waters.' In between these I modeled whales and other sea creatures. The Ox is lowing. Its breath rises in the wintery air, folding over its head and back depicting the seas over which the ancient Scandinavians made their voyages." - Struggle: The Art of Szukalski (2000); pub. by Last Gasp, San Francisco

0
Your bag is empty
Start shopping