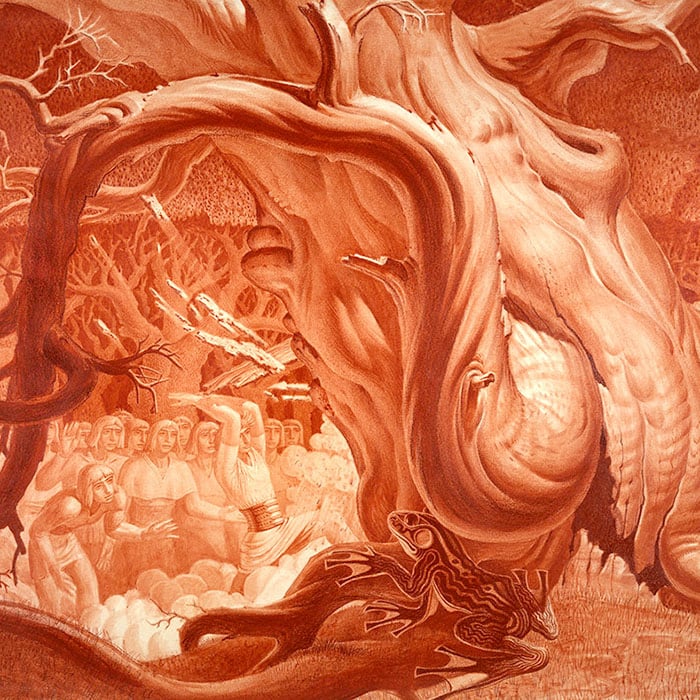 Limited edition of prints based on the original conte crayon drawing c.1946

Krak at the Confessional Oak

"In the deep jungle stands a dead oak tree, occupied by the never seen Confessor. To the oak come all sorts of people, the innocent and the politicians who run the nation. After knocking on the tree they plead loudly before the Confessor what they should do. To some of the queries, he knocks from within and people depart, doing what they were instructed to do by the wise Confessor. However, when presented the question as to the existence of the Dragon and the necessity of being sacrificed as victims of the great reptilian, the answers came contradictory. So Krak rushes to the side of the oak, tearing off the loose and worm-eaten slats of its side, sending the frog Rege, Rege, who is the Nurse of the race, to fetch out the Confessor. After much noise and commotion within, amid the flying dust, Rege brings out the wise man who ordains the History and Fate of the nation, but who is a mere...woodpecker. - From the tragedy of Rege! Rege!" - Struggle: The Art of Szukalski (2000); pub. by Last Gasp, San Francisco

0
Your bag is empty
Start shopping